LAMOST helps to reveal the structure and evolution of sub-Neptunes

Using the data combined from LAMOST, Gaia and Kepler, an international research team, led by Dr. Di-Chang Chen and Prof. Ji-Wei Xie of Nanjing University, has investigated the evolution of the planetary radius distribution as a function of the stellar age and metallicity. Their results deepened the understanding of the structure of sub-Neptunes and provided insights into the formation and evolution of sub-Neptunes. As the third paper of the “Planet Across Space and Time (PAST)” series aiming to investigate the planetary systems in the Galactic context, it has been published in The Astronomical Journal.

Since the 1990s, more than 5000 exoplanets have been identified and thousands of candidates to be confirmed. Surprisingly, the most abundant type of planets discovered so far is neither gas giant planets nor rock planets, but planets between Earth and Neptune, which are not found in our solar system. Among them, those slightly larger than the Earth (about 1-2 Earth radius) are called "super-Earths", and those slightly smaller than the Neptune (about 2-4 Earth radius) are called "sub-Neptunes". What are the structures of these planets (see Figure 1) and how did they form and evolve？This is one frontier question in the exoplanet science, and its answer can provide key clues for understanding the diversity of exoplanets.

With the large planet sample provided by Kepler, statistical studies have revealed an important planetary feature, i.e., a radius valley (a paucity of planets around two Earth radii) that separates rocky, compact super-Earths and sub-Neptunes with lower bulk densities (See Figure 2). At present, it is generally believed that the super-Earths are “enlarged version” of the Earth, i.e., larger rocky core with a thin atmosphere. However, the structure of sub-Neptunes is still unclear.

Until now, a number of theoretical models have been proposed to explain the radius valley. These models can be generally divided into two categories: evolutionary models and primordial models. From the view of evolutionary models, a sub-Neptune is composed of a rocky core and a thick gas envelope. The atmospheric envelopes of some sub-Neptunes were stripped, leaving only the rocky cores (i.e., super-Earths), forming the observed radius valley and bimodal distribution. The energy source that drives the atmosphere loss process could be either from the radiation of the host star (photo-evaporation mechanism), or the cooling luminosity of the central planet core (the core-powered mass-loss mechanism). On the other hand, primordial models treat the radius valley as a natural result of planet formation and migration. Some studies suggested that the valley emerged because of the formation of two distinct planet populations with two different compositions, i.e., rocky super-Earth and water/ice-rich sub-Neptune (e.g., "ocean planet" whose surface is covered by a deep ocean of hundreds to thousands of kilometers). 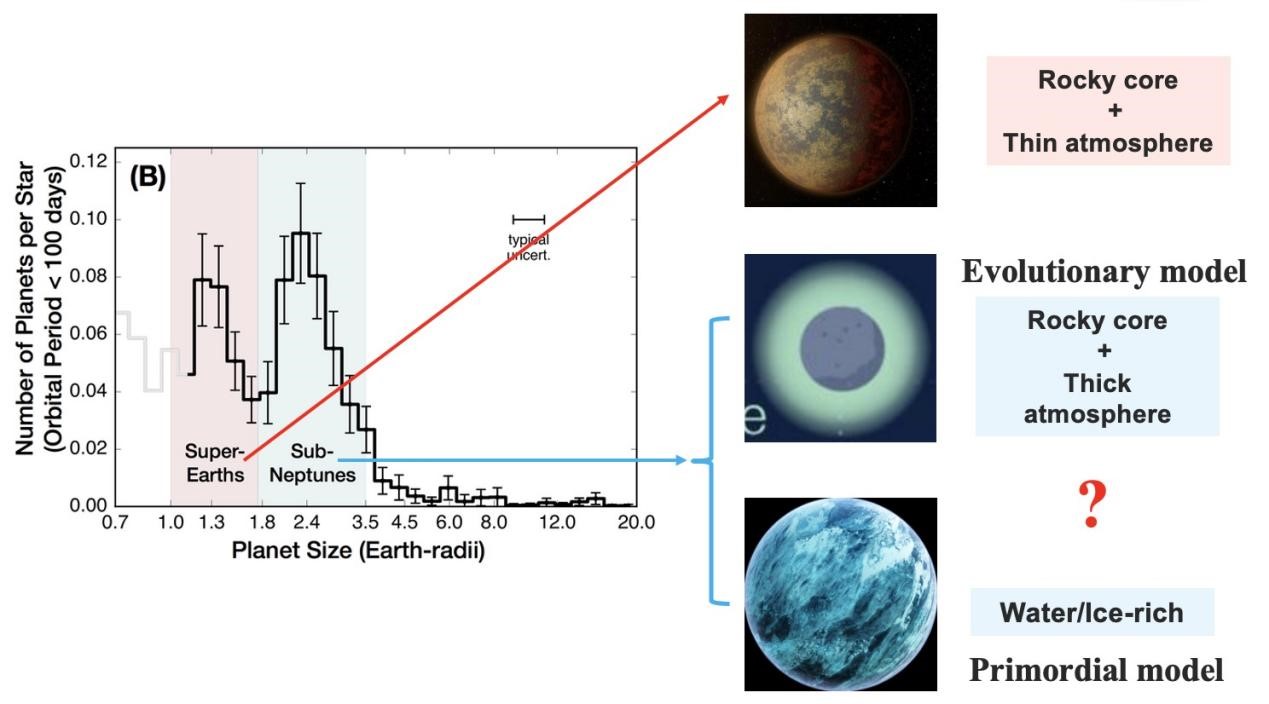 Using the LAMOST-Gaia-Kepler catalog, the research team performed a systematical investigation into how the radius valley morphology varies with stellar age and metallicity. They found that the average radius of Neptunes and sub-Neptunes decreases with increasing age, while the average radius of sub-Earths is broadly independent of age, suggesting that sub-Neptunes are born with significant gaseous envelope.

“It’s not difficult to understand. As planets grew older, they gradually cooled down and thus the gas envelope contracted, leading to a decrease in their radii,” explained Dr. Di-Chang Chen, the first author of the paper. “Our discovery further supports the evolutionary model, indicating that, at least in part, sub-Neptunes are gas dwarf giants.”

The researchers also found that the radius valley emerged before 1 Gyr and became more prominent over time. The number ratio of super-Earth to sub-Neptune increases as star ages, in agreement with the expectation of evolutionary theory: some sub-Neptunes lost their atmosphere and evolved into super-Earths. Quantitatively, the radius valley is primarily formed by the photo-evaporation at early stages and further strengthened by core-powered mass loss.

Besides, their results also show that sub-Neptunes are preferentially formed around stars with rich iron, magnesium, silicon, calcium, titanium, etc., suggesting that these elements play important roles in the formation and evolution of sub-Neptunes.