The Large Sky Area Multi-Object Fiber Spectroscopic Telescope (LAMOST), as one of the National Major Scientific Projects undertaken by the Chinese Academy of Science, is a special quasi-meridian reflecting Schmidt telescope located in Xinglong Station of national Astronomical Observatory, China (a national facility open to the astronomical community). After being approved by National Development and Reform Commission on Oct.1997, LAMOST began construction on Sep. 2001 and finished on Oct. 2008. LAMOST project smoothly passed the national acceptance on Jun. 2009. LAMOST optical system consists of a reflecting Schmidt Ma at the northern end, a spherical primary mirror Mb at the southern end and a focal surface in between. Mb has a size of 6.67m×6.05m, which consists of 37 hexagonal spherical sub-mirrors, each of them having a diagonal diameter of 1.1m and a thickness of 75mm. Ma is 5.72m×4.40m, which consists of 24 hexagonal plane sub-mirrors, each of them having a diagonal diameter of 1.1m and a thickness of 25 mm. Both the primary mirror and the focal surface are fixed on their ground bases, and the reflecting corrector tracks the motion of celestial objects. Hence, the celestial objects are observed around their meridian passages. As shown in figure 2, the light collected is reflected from Ma to Mb, again reflected by Mb and forms image of the observed sky on the focal surface. The light of individual objects is fed into the front ends of optical fibers accurately positioned on the focal surface, and then transferred into the spectrographs fixed in the room underneath, to be dispersed into spectra and recorded on the CCD detectors, respectively and simultaneously. The overall concept and key technical innovations makes it a unique astronomical instrument in combining a large aperture with a wide field of view. The available large focal surface accommodates up to 4000 fibers, by which the collected light of distant and faint celestial objects down to 20.5 magnitudes is fed into the spectrographs, promising a very high spectrum acquiring rate of several ten-thousands of spectra per night. MAIN CHARACTERISTICS OF LAMOST

The engineering of LAMOST consists of eight subsystems, optic system, active optics and mirror supporting system, mounting and tracking system, telescope control system, focal plane instruments, telescope enclosure, observatory control and data processing, and input catalogue and survey strategy. After the two year commission period from 2009, it is doing a pilot spectroscopic survey with LAMOST from October 2011 to June 2012. The first year observation mission of the LAMOST regular survey launched on September 28, 2012, and have been already successfully accomplished on Jule15,2013. 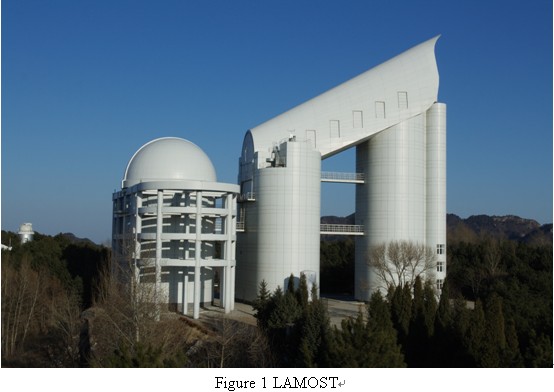