An international research team led by astronomers from Beijing Normal University and the University of Sydney has recently published a collaborative research paper in Nature Astronomy, reporting their discovery of helium-burning red giant stars that have undergone partial mass transfer for the first time, based on the data obtained by Kepler, LAMOST, and APOGEE. 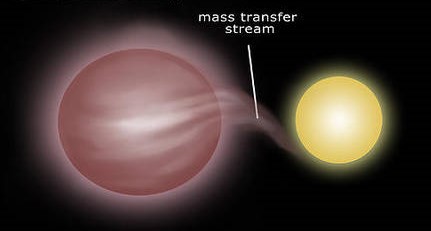 Red giants are bright stars at a late evolutionary stage. If a red giant is in a binary system, as it expands, some of its material can reach the gravitational range of the companion star and be drawn away. However, red giants undergoing partial mass transfer are very similar to ordinary red giants due to their extremely similar surface brightness and temperature, making it difficult to distinguish between them using traditional methods.

The researchers used asteroseismology -- the study of stellar oscillations -- to pinpoint the basic properties of over 7,000 red giants observed by the Kepler mission, including their evolutionary stages, masses and radii. Combining the data of LAMOST and APOGEE, two classes of 40 red giants with unusual properties were finally identified: one with very low masses and one with fainter brightness.

The first class of low-mass red giants have masses of only 0.5 to 0.7 solar masses. Generally, red giants with low masses are older, and for these ones with masses of 0.5 to 0.7 solar masses, the time significantly longer than the age of the universe is needed to evolve to their current stage. However, no one can be older than the universe, so these low-mass red giants must have lost masses by other means. Another class of underluminous red giants have normal masses, ranging from 0.8 to 2.0 solar masses, but they are significantly fainter than normal red giants. The researchers believe it is because their central cores are smaller than ordinary single stars, thus providing less nuclear energy to support their brightness.

“Our discovery of these post-mass-transfer red giants also demonstrates asteroseismology as a powerful way to find interesting binary systems,” said Prof. Shaolan Bi from Beijing Normal University, a co-author of the paper.