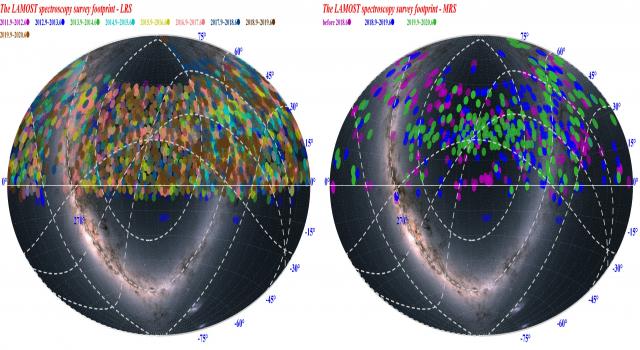 LAMOST survey contains two main parts: the LAMOST ExtraGAlactic Survey (LEGAS), and the LAMOST Experiment for Galactic Understanding and Exploration (LEGUE) survey of Milky Way stellar structure. The unique design of LAMOST enables it to take 4000 spectra in a single exposure to a limiting magnitude as faint as r=19 at the resolution R=1800, which is equivalent to the design aim of r=20 for the resolution R=500. This telescope therefore has great potential to efficiently survey a large volume of space for stars and galaxies.
The whole workflow of LAMOST is as follow: First, according to the science goals and sky survey strategy, the Observation plan in which 4000 observation objects are selected from the database which contains millions of objects data (Galaxies, quasars, stars) is generated by SSS. Second, OCS operates TCS and ICS in real-time based on the Observation Plan and Observation Process Flow at the observable night. The telescope Operation Reports and spectrum Raw Data are recorded. The third, the spectrum Raw Data and spectrum Quality Report are handled by the DHS. The Spectrum Parameter, Operation Report, Quality Report, Analyzed Report are also analyzed simply and sent to SSS for next observation plan. The final data products will be released the collaborators for scientific research.
Technique description
The novel design of LAMOST system is a telescope that provides a combination of a large aperture and a large field of view, both of which feed a highly-multiplexed spectroscopic system. LAMOST is a reflecting Schmidt telescope with its optical axis fixed along the north-south meridian. Both the Schmidt mirror (MA) and the primary mirror (MB) are segmented. The focal surface is circular with a diameter of 1.75 meters (∼5°), 4000 fibers are almost evenly distributed over it. Each of the fibers can be moved with two degrees of freedom by two motors. The dome for LAMOST has three towers aligned in a North-South direction, hosting Mirror A, the focal surface and instruments, and Mirror B respectively. Mirror A has a transitional dome which can be opened completely. The focal surface and Mirror B towers are connected by a tube structure.

END_OF_DOCUMENT_TOKEN_TO_BE_REPLACED