Based on LAMOST and Kepler data, a new study led by astronomers from National Astronomical Observatories of Chinese Academy of Sciences (NAOC) has revealed evolutionary features of lithium for evolved stars, which updates our understanding about the theory of stellar structure and evolution. The results have been published in The Astrophysical Journal Letters.

Surface lithium (Li) abundances display various patterns for stars of different types as well as at different evolutionary stages. The signatures of Li are good manifestations of subtle physical processes beneath the surface and provide key information about internal stellar structure and evolution.

However, due to the difficulties of classifying evolutionary stages, especially separating core helium burning (HeB) from red giant branch (RGB) bump stars by traditional approach, the evolutionary features of Li from the RGB to the HeB stage have long been in the dark.

Thanks to the uncovered evolutionary stages and determined Li abundances based on the asteroseismic analysis and spectroscopic survey, respectively, Dr. Jinghua Zhang, the first author of the paper, together with collaborators, was able to investigate the signatures of Li for stars evolving from the RGB to the HeB phase with the 1848 giants selected in the LAMOST-Kepler/K2 fields.

They find that the stars at RGB phase show natural depletion along with their evolution; particularly, there are no obvious crowd stars with anomalously high Li abundances near the bump. While during the HeB phase, there is no indication of obvious Li depletion.

Furthermore, the Li abundances of most of the low-mass stars that have just start their HeB phase (zero-age HeB, ZAHeB) shows an increase compared to the stars above the RGB bump (Figure). It suggests that the helium flash, which happens between the phases of RGB and HeB, may lead to moderate Li production.

A previous theoretical study has speculated that helium flash may produce Li, while this work has just confirmed their inference from observations, and also provides a constraint on the amount of Li produced during helium flash. 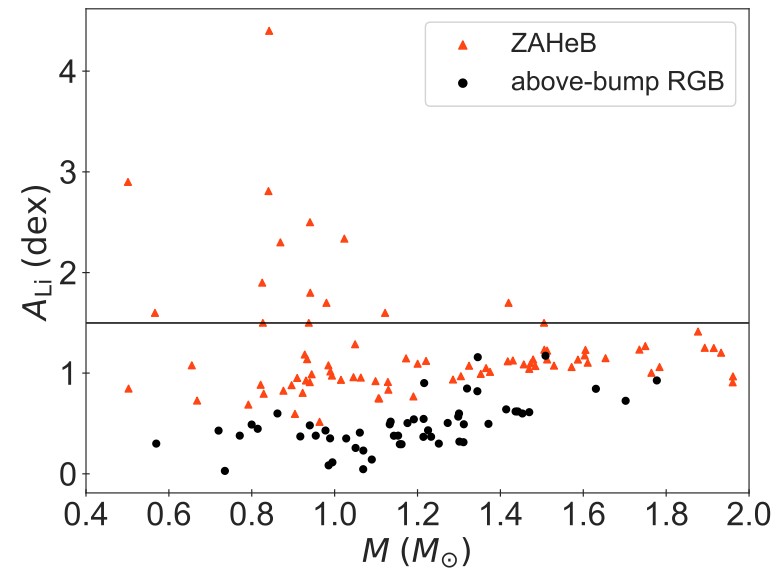 Figure: Li abundances versus mass for stars locating above the RGB bump and HeB stars within reach of ZAHeB edge. The horizontal line denotes the lower limit of Li enhancement. (Credit: Jinghua Zhang)

"This is a timely paper on an interesting topic (Li in red giant stars) which has long been a puzzle, and is now being revitalized by the existence of new, larger, more precise, and better characterized datasets (including the asteroseismic datasets discussed here)," commented by the reviewer of the paper.