Based on LAMOST and Gaia data, a new study, carried out by Chinese astronomers from National Astronomical Observatories of Chinese Academy of Sciences (CAS), Shanghai Astronomical Observatory of CAS and Nanjing University, has revealed a wobbly and flared Milky Way disk, which updates our understanding about the disk. The results have been published in The Astronomical Journal.

The Milky Way is a typical disk galaxy. In the classical view of the Milky Way, the disk is symmetric and flat on the whole, like a pancake. Stars in the disk rotate around the Galactic center, with mean radial and vertical velocities to be zero.

With the help of huge observational data provided by large survey projects in recent years, more and more details hidden in the Milky Way disk, such as the non-negligible radial and vertical stellar motions in the solar neighborhood and the north-south asymmetry in the stellar distribution, have become apparent, casting doubts on the traditional imagination about our host galaxy.

“In this context, the huge number of spectra obtained by LAMOST and the high-precision astrometric data released by Gaia provide a golden opportunity for re-exploring the disk structure,” said Prof. Gang Zhao, the corresponding author of the work.

Led by Dr. Pingjie Ding, the first author of the work, the researchers selected ~490,000 K-type giants from LAMOST DR8 and Gaia EDR3 as tracers. They find that in the spatial range of Galactocentric radius of 5-15 kpc and 3 kpc above and below the Galactic plane, vertical wobbles exist in the three-dimensional mean velocities. 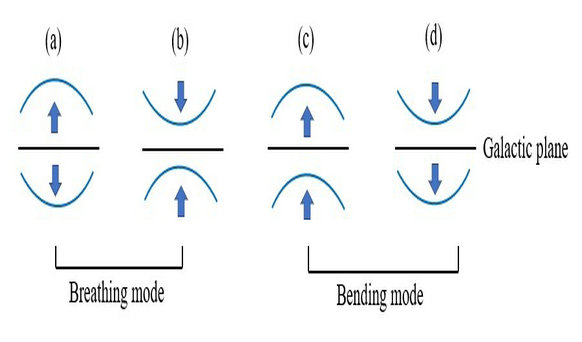 Figure 1: Illustrations of the vertical motion modes of the Galactic disk. Panels (a) and (b) denote the rarefaction-like and contraction-like breathing modes. Panels (c) and (d) denote the upward and downward bending modes. (Credit: Pingjie Ding)

Contrary to the classical picture that stellar motions keep symmetric about the Galactic plane, the K-type giants below the plane are found to rotate faster than those above. Meanwhile, inner disk stars migrate radially toward the outer disk, while outer disk stars exhibit alternate inward and outward radial motions, with velocities highly dependent on the vertical distance. Moreover, it is interesting to find that a contraction-like breathing mode and an upward bending mode dominate the vertical motion of the outer disk. Both modes are quite significant in the Galactocentric radius of 8-13 kpc. By comparison, there is only a weak rarefaction-like breathing mode and a trivial downward bending mode in the inner disk. (Figures 1 and 2) Further, the researchers revisited the nature of the disk flaring by estimating the scaleheight of the disk with the measured velocity ellipsoid. They find that the scaleheight increases obviously with the increasing Galactocentric radius, leading to a flaring feature. The results also indicate that north and south disks have consistent flaring strength. Similar flaring structures have also been detected in some external galaxies, which means that a flared disk could be a common phenomenon in disk galaxies. 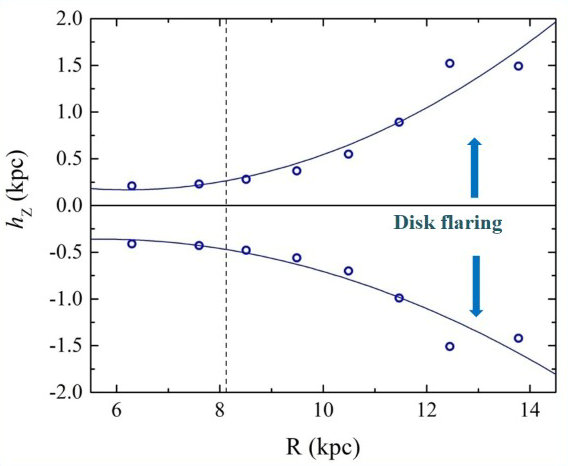 The wobbly disk probed by the LAMOST-Gaia K-type giants could be attributed to the perturbations produced by both inplane substructures (including the spiral arms and the central bar) and long-lived external perturbers (such as a satellite galaxy). The mechanism behind the flaring structure still remains mysterious. Some hypotheses, for example, the miner merger, could throw light on the problem.

“This study provides high-quality clues to the Galactic structure and evolution. Continuous observations will help to tell a more insightful story of the Milky Way,” said Xiangxiang Xue, the second author of the paper.