An international team of astronomers from the United States, Germany, and China has used LAMOST data to discover and characterize a new and rare type of cataclysmic variable (CV), LAMOST J0140355+392651. It appears to be a transitional object between the previously studied populations of CVs and extremely low-mass white dwarfs (ELM WD), which has not been observed before. This new study has been published in the Monthly Notices of the Royal Astronomy Society. 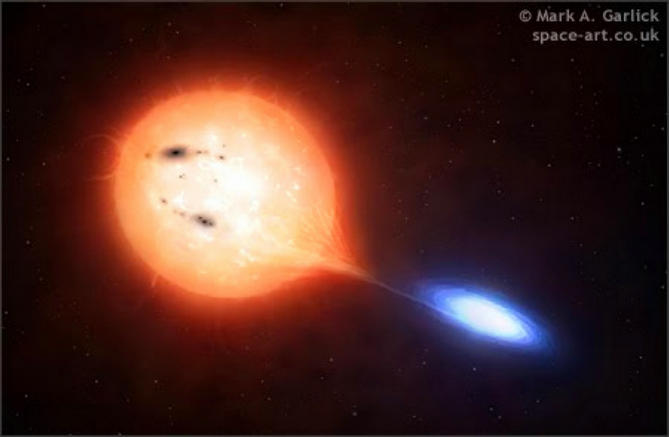 About half of all stars in the Milky Way are not isolated like the Sun, but are members of binary systems, which contain two stars formed at the same time from the same cloud of gas. In binaries born with short orbital periods (less than a few years), the two stars will eventually interact with each other, exchanging mass and energy. This type of interaction gives rise to many of the most spectacular astrophysical phenomena.

In the last 50 years, observations of CVs have been critical for the development of models for mass transfer in interacting binaries, which have also been fruitfully applied to X-ray binaries containing neutron stars and black holes.

As a result, the donor stars in most CVs fall on a tight, almost one-dimensional sequence of mass, radius, temperature, luminosity, and mass loss rate as a function of orbital period. If one knows the orbital period (a quantity that is usually easy to measure observationally), one can reliably predict most other properties of a CV. This empirical "donor sequence" has proved very useful for testing and calibrating models of binary mass transfer.

Now, based on LAMOST data, the international research team led by Dr. Kareem El-Badry, an astrophysicist at the Institute for Theory and Computation at Harvard University, discovered and characterized a new object, LAMOST J0140355+392651 (or LAMOST J0140 for short). It is a peculiar CV, whose temperature, mass, and radius are quite different from the predictions of the canonical donor sequence. The velocity difference of a few hundred km/s between observations on different nights, revealed by LAMOST spectra, prompted the team to carry out more observations with another telescope and fully constrain the orbit.

The further analysis relied on follow-up observations using the Shane telescope at Lick Observatory in California, USA, on astrometry from the Gaia satellite, and on archival observations from several photometric surveys carried out from the ground and from space.

The new object appears to be a rare type of CV in which the donor is not a main-sequence star, but rather the bloated helium core of a star that had already undergone significant nuclear evolution when mass transfer began. Evolutionary models calculated by the team predict that mass transfer will soon end, and the donor will thereafter appear as a detached ELM WD.

"LAMOST J0140 thus appears to be a transitional object between the previously studied populations of CVs and extremely low-mass white dwarfs. Such objects had been theoretically predicted to exist previously, but had not been observed," said Dr. Kareem El-Badry, the lead author of this study.

Eventually, the system is predicted to evolve into an ultra-short period "AM CVn" binary, with mass transfer resuming at an orbital period of only a few minutes. 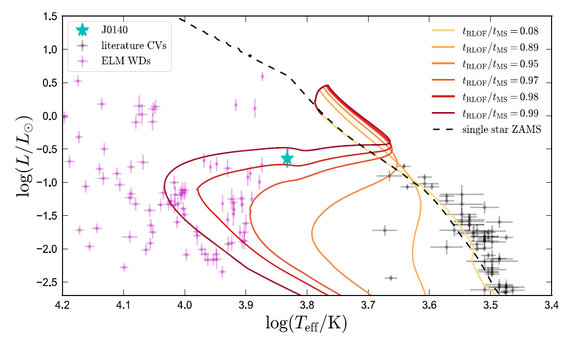 Prompted by the discovery of LAMOST J0140, El-Badry's team launched a systematic survey to find more such objects. In their next paper, they will report the discovery of an additional 20 objects in a similar evolutionary stage. This new population of objects will provide a valuable testing ground for models of compact binary evolution.