Nitrogen, most of the time appears as colorless and odorless gas, which makes up 78% of the present atmosphere of Earth. It is also essential to life on Earth as a vital component of proteins and nucleic acids.

However, nitrogen is not made in our planet Earth, but in shining stars across the Universe, like most elements heavier than helium. In our Milky Way, a small group of "field stars" (stars that are not located in star clusters) are found to have more nitrogen elements than others, and astronomers name these stars as "N-rich field stars". How do these stars form and where do they come from are still a mystery.

Globular clusters (GCs) had been traditionally considered as simple stellar population systems, i.e., all member stars originate from the same molecular cloud, share the same age and chemical composition. However, an increasing number of studies show that almost all GCs host two or more groups of stars with different chemical abundances, which is so-called the multiple populations. Stars with enhanced nitrogen, sodium, sometimes helium, aluminum, and silicon, but depleted carbon, oxygen, sometimes magnesium, are called the "second-generation" stars, distinct from the primordial "first-generation" stars.

Most scenarios trying to explain this phenomenon assume that chemically enriched second-generation stars were formed in light-element-polluted environment partially mixed with the ejecta of first-generation stars.

"The unique chemical pattern enables us to identify the second-generation stars from globular clusters, which is crucial to reveal the co-evolution of Milky Way and globular clusters," said Dr. Jincheng Yu, the lead author of this study.

Prof. Baitian Tang, the corresponding author of this study, led a project that has found over one hundred N-rich field stars based on the Large Sky Area Multi-Object Fiber Spectroscopic Telescope (LAMOST) survey, which is one of the largest homogenous sample of N-rich field stars for follow-up studies.

To fully understand their formation and origin, an international research team, including members from China and Chile, obtained the high-resolution spectra for 15 N-rich field stars over three nights in the Magellan Clay telescope. They measured the precise abundances of over twenty elements, which can be used as "name tags" for stars to find their birth places.

A very special N-rich field star with extreme low alpha-element (e.g., magnesium, calcium, silicon, titanium) abundances is spotted (the star with red circle in the Figure). "Its low alpha abundances are consistent with those of extragalactic stars, which imply slower chemical enrichment. The extragalactic origin of this star is also confirmed by its dynamics", said Prof. Baitian Tang.

"Our findings also help us in understanding how N-rich field stars form, and how they leak into Milky Way," supplemented by Dr. Jincheng Yu. 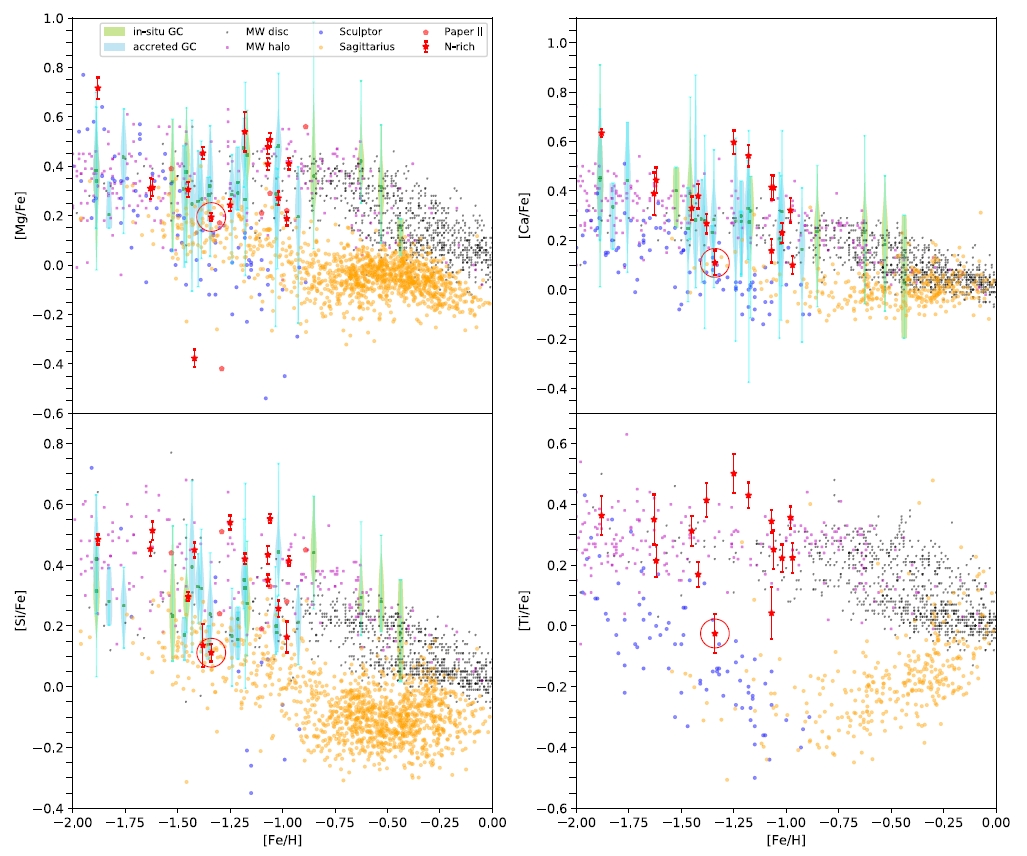