Lithium-based products are very common in our daily life, while lithium is a very special element in astronomy.

In standard stellar models, it's expected that a star in its elderhood has already diluted its surface lithium to a very low degree. Astronomers assumed such predictions to be correct until 1981 when astronomers discovered a Li-rich giant. The number of Li-rich giants is very small, probably only 1% giants showing a surface lithium enrichment.

The study result has been published on the Research in Astronomy and Astrophysics.

LAMOST/HRS is a new spectrograph designed by Nanjing Institute of Astronomical Optics & Technology of CAS and installed on LAMOST telescope. It is a single-object and fiber-fed spectrograph, with a resolution power of R ~ 30000 and a wavelength coverage from 3800 to 7300 angstrom. As one of the maintenance and reconstruction projects of LAMOST, LAMOST/HRS was put into use in 2018.

"Its successful operation makes LAMOST high-resolution spectral observations possible, and for sure will broaden the application prospects of LAMOST data in scientific research," said Prof. SHI, the corresponding author of the work.

The researchers selected and observed lithium-rich giant candidates during two bright nights in November 2018 to test the performance of LAMOST/HRS. According to the reduced data, LAMOST/HRS can obtain spectra of similar quality to those obtained by ARCES, which is a high resolution (R ~ 31500) and cross-dispersed visible light spectrograph mounted on the Apache Point Observatory 3m5 telescope.

With the high-resolution spectra, the researchers analyzed the chemical compositions and the lithium enrichment mechanisms of the two stars. Interestingly, except for lithium, the abundances of other elements are basically the same level as those of ordinary giants.

"All evidences indicate that the lithium of the two stars was produced through internal mechanisms, rather than external ones such as 'swallowing' planets," said Dr. ZHOU, the first author of the paper.

It is also found that TYC2825-596-1 is a red clump giant star. The lithium enrichment mechanism of this type stars is not yet clear, and may be related to helium flash or non-classical convection processes.

"We also expect that LAMOST/HRS can produce more and better data in the future, and play a role in the development of optical astronomy." said Prof. SHI. 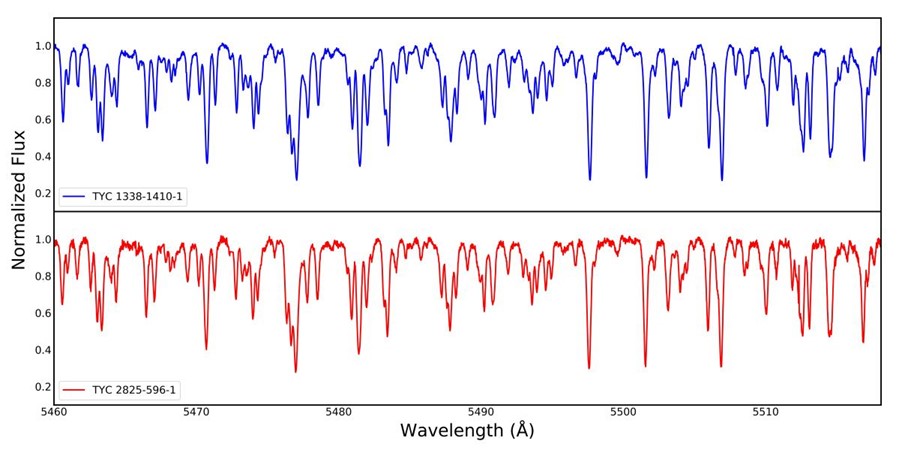