Revealing Secret of Lithium-rich Stars by Monitoring Their Heartbeats

Lithium is an ancient element that is almost as old as the universe itself. As one of the building blocks of our present-day universe though, the context of lithium observed in many celestial bodies often disaccord with predictions of classic theories.
Lithium-rich stars, accounting for only 1% of the total number of the low-mass evolved stars, are one example of such conflict. They preserve up to thousands of times more lithium than the normal starsthat account for the rest 99%. Astronomers are wondering what these stars really are and why.

A recent study from an international team led by Prof. ZHAO Gang, Prof. SHI Jianrong, and Dr. YAN Hongliang from National Astronomical Observatories of the Chinese Academy of Sciences (NAOC) provides new insights to lithium-rich stars. The study was published in Nature Astronomy on Oct. 5.

By monitoring their “heartbeats”, they found that most lithium-rich stars are the so-called “red clumps” rather than the “red giants” as previously thought. 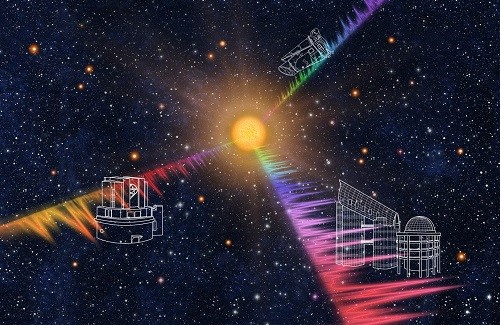 “The‘red clumps’ and ‘red giants’ are names for different stages of the senile stars,” said Prof. ZHAO, the co-corresponding author of this paper. “Though they look alike on the H-R diagram, a tool for mapping the evolutionary stage of a star over its lifetime.”

“Imagine you are looking at two grey-haired elders,” he added, “it is very hard to tell who is older just by their appearances.” 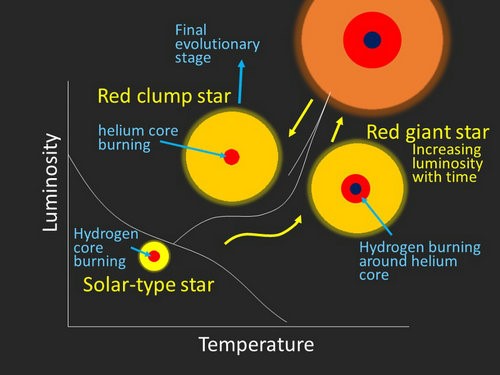 “The key problem is that,” said Dr. YAN, the lead author of this study, “we don’t exactly know what the lithium-rich stars really are, but now we do.”

The game changer here is the combination of spectroscopy and the asteroseismology, a technique that measures the feature of a star’s oscillation by monitoring their light variations from a space satellite, Kepler, run by NASA. “We are monitoring the heartbeats, taking the cardiogram for stars,” said Dr. YAN. “Although the‘red giants’and‘red clumps’ are alike in appearances, they have different hearts, thus beat diversely.”

Most lithium-rich stars in this study were found by the Large Sky Area Multi-Object Fiber Spectroscopic Telescope (LAMOST), a special quasi-meridian reflecting Schmidt telescope with active optics technique, located at Xinglong Station, China. Some of these stars were also observed by other telescopes worldwide using different resolution, such as Subaru telescope operated by Japan, for confirming that the information derived from LAMOST data are correct. “The spectra can tell us the physical parameters of the stars, and how much lithium are kept in their atmospheres,” said Prof. ZHAO. “So spectra are equally important as the ‘heartbeats’of stars in our study.”

The research shows that over 80% of lithium-rich stars are “red clumps”. Also importantly, it reveals a bunch of new signatures for lithium-rich stars when their “heartbeats” help to classify individual stars into “red clumps” or “red giants”. “All of these signatures are hard to explain using the current scenarios,” said Prof. SHI, the other co-corresponding author of the paper, “There are still some unknown processes that could significantly affect surface chemical composition in low-mass stellar evolution, but this is an exciting opportunity for us astronomers to find out how lithium is created in stars.”