New evidence for the origin of warp in the Milky Way

Most spiral galaxies, like Milky Way, have a warped disk, which is like a potato chip in the outer disk. But the origin of warp is still a mystery for astrophysicist. 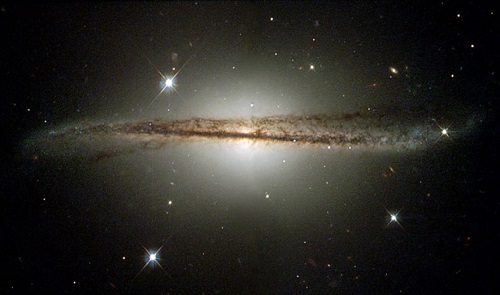 Recently, a research team led by Dr.Hai-Feng Wang, the LAMOST Fellow, collaborating with Dr. Martín López-Corredoira of Instituto de Astrofísica de Canarias in Spain push the understanding of the puzzle that how our home galaxy warped disk is from. This study was published in The Astrophysical Journal on July 10.

"Like many spiral galaxies in the universe, Milky Way’s warp was detected by gas and dust many years ago. Many mechanisms were proposed but some observational evidences may favour some of them. In any case, we know the kinematical information like vertical motions can be used to constrain the warp’s properties", said Dr. Hai-Feng Wang.

Researchers analyzed the amplitude evolution of the stellar warp independently of any assumption with a simple model by combining LAMOST DR4 and Gaia DR2 common red clump stars.

"We discovered that the younger stellar populations exhibit stronger warp features than the old ones clearly", said Dr. Martín López-Corredoira.

"All of this self- consistent evidence supports that our Galactic warp should most likely be a long lived, but non-steady structure and not a transient one, which is supporting the Galactic warp is induced by the non-gravitational interaction over the disk models, e.g., gas in-fall onto the disk scenario”, Said Dr.Hai-Feng Wang.

"This is the first time here the warp evolution is followed with complete age sampling of the Milky Way thanks to the LAMOST data”, said Dr. Martín López-Corredoira.

Referee of this paper pointed out, "this paper presents a new step towards our knowledge of the warp in the Milky Way disk, and its origin".

This group are still fighting for the ambitious plan “Mapping the Milky Way Disk Population Structures and Galactoseismology (MWDPSG)” with large sky surveys.

"We expect that we could establish a theoretical framework in the future to unify the global picture of the disk structures and origins after a few years' persistent efforts. There is still a long way for us to go with this project and the warp, the topic of this paper is an important part of this plan", said Dr.Hai-Feng Wang. 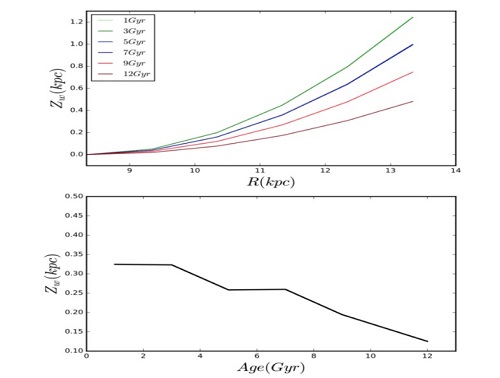 Figure2. The top panel of the figure shows the greatest height of warp disk distributions with Galactic radial distance, in which the different color solid lines represent different ages. The bottom one is the median value of the greatest height Zw with age, a clear amplitude decreasing are here. (Credit: Hai-Feng Wang)