Discovery: New Moving Group in the Local Arm of the Milky Way

Recently, a research group of Prof. Gang Zhao from National Astronomical Observatories of Chinese Academy of Sciences (NAOC) has discovered a new stellar moving group near the Orion Nebula in the Milky Way, using the data of LAMOST DR5 and Gaia DR2. This research result has been published in the Astronomical Journal.

A moving group is a group of very loose stars, which is generally the remnant of a stellar association drift through the Milky Way. The detection and origin analysis of moving groups are of great significance for the understanding of the Galactic formation, structure, and evolution. Large samples of reliable data such as proper motion, radial velocity and distance are required for the detection, while advanced and effective detection methods are also important. The combination of the LAMOST huge spectral dataset and the Gaia astrometric data provides a unique advantage in detecting moving groups.

This newly discovered moving group contains a total of 206 member stars, 74 of which are pre-main sequence stars - protostars whose central hydrogen has not been ignited, and the rest are G- and K-type giant stars.

"The discovery of this moving group provides an observational evidence for studying the possibility that the spiral-arm density wave drives the stars to gather and then trigger the collapse of the nebula. At the same time, located in the local spiral arm of the Milky Way, this moving group also provides a new sample to study the disruption of stellar groups," said Prof. Jingkun Zhao, a member of the research group. 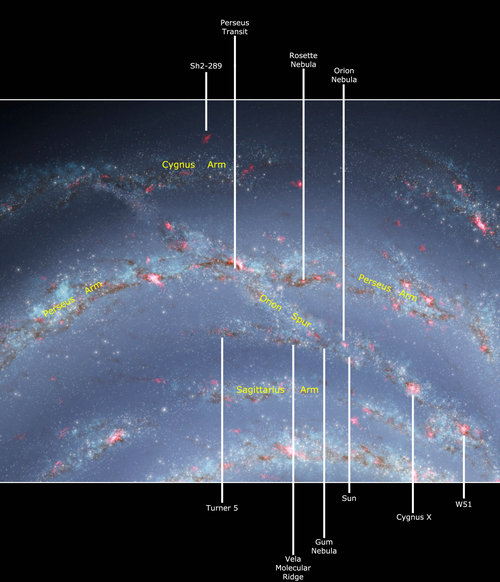 Figure. The positions of the Orion Nebular, the local arm, and our Sun. (Credit: Wikipedia)