A PhD candidate, Liqing Huang, and collaborators have recently studied the flare activity of 12 M-dwarf eclipsing binaries, using the photometric light curves obtained by the Kepler Space Telescope and the spectroscopic data obtained by LAMOST and the 2.4-m telescope at Yunnan Observatory. Their results show that the flare frequency of these M-dwarf eclipsing binaries is in general about a factor of 10 higher than the single M dwarfs with flare activity. This work has been published in The Astrophysical Journal.

A flare is a sudden flash of increased brightness in some local areas on stars, which is a phenomenon of powerful magnetic explosion. According to the energy level, flares are generally divided into superflares and ordinary flares. “It is generally believed that the flare activity is more frequent in late-type stars. There are a large proportion of late-type stars in the Milky Way. Among them, longer-lived M-dwarf systems provide enough time for the birth of life. However, if the flare activity is too frequent and violent, it may affect the development of life,” said Prof. Ali Luo from National Astronomical Observatories of Chinese Academy of Sciences (NAOC), a member of the research team.

While astronomers already have quite a few studies on the flare activity of single M dwarfs, we know little about that of binaries. If an M dwarf becomes the primary component in a binary system, will it make any difference in the flare activity?

The Kepler Space Telescope has made photometric observations for over 100-square- degree sky area for four consecutive years, so its light curve data is suitable for the study of occasionally happened flares. Moreover, an intensive spectroscopic observation has been carried out by LAMOST for the Kepler sky area. Based on these data, together with the spectral data obtained by the 2.4-m telescope at Yunnan Observatory, the researchers in total collected 12 M-dwarf eclipsing binaries having both photometric and spectroscopic data, and they found that their superflare frequency was significantly lower than the same-type single stars, while the ordinary flare frequency is 10 times that of single stars.

Why flares happen so much more frequently in these eclipsing binaries than single stars? By analyzing the correlation of the flare occurrence rates with the orbital phase of the binary systems (see the Figure), the researchers found that when the secondary transit happened, namely the secondary star of the binary system was blocked by the primary star, the flares became fewer than those when the binary at other orbital phases. “It can be speculated that some flare events should come from the small secondary star in the binary system. It is the contribution of the secondary star that makes the flare occurrence rate of the eclipsing binaries 10 times higher than single stars. This might be the consequence of magnetic interaction between the primary and secondary component of individual binaries,” said Prof. Luo, “and this result provides a new point of view to study the mechanism of flares.” 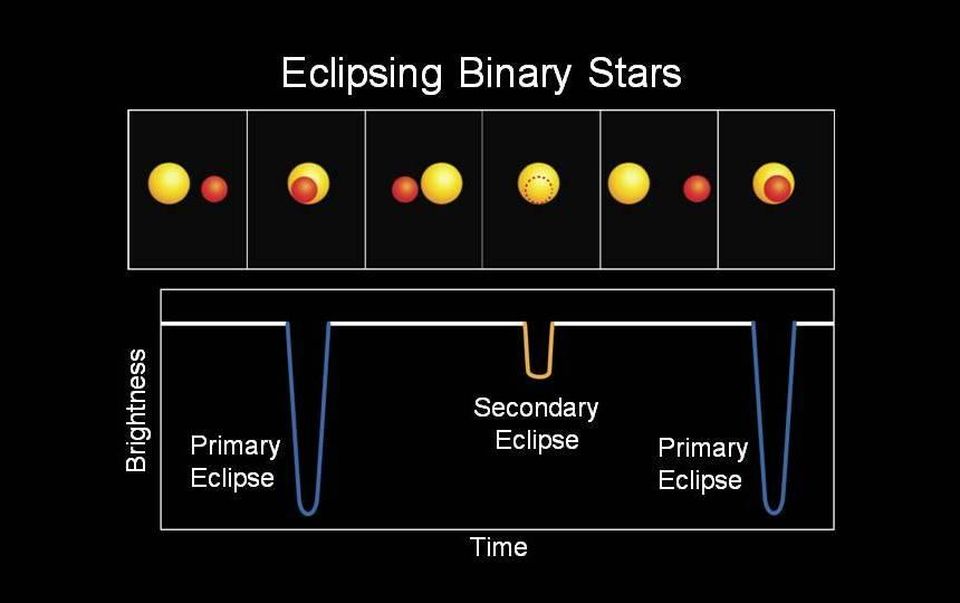 Figure. Cartoon picture showing the primary and secondary stars of an eclipsing binary system orbiting each other, and the corresponding brightness variation of the binary system. (Image credit: NASA)